J.K.Rowling "Harry Potter and the Prisoner of Azkaban" 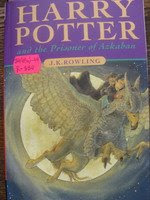 Harry Potter and the Prisoner of Azkaban is the third novel in the Harry Potter series written by J. K. Rowling. I think this book, funny and imaginative story, is adored by children and parents alike. It’s a fantastic new story about Harry Potter and his friends. Harry is about to start his third year at Hogwarts School of Witchcraft and Wizardry. When Harry gets to Hogwarts School after the summer holidays the atmosphere is tense.For the ominous Dementors have come to Hogwarts to protect Harry from the escaped prisoner Sirius Black — a convicted murderer who also happens to be Harry’s godfather….
Irina