Ian Fleming "The Spy Who Loved Me"

It's pretty good. But not as a James Bond story. The story is told through the eyes of a girl who meets Bond at a motel where she got a job to raise money for her trip across the USA. She tells us of her first two love affairs, one with a teenage boy, and one with her German employer. She describes how each one excited her at first, and why each relationship went wrong.
Irina
Комментариев нет: Ссылки на это сообщение

The main heroine of this novel is Catherine Morland, a 17-year-old girl who is fond of reading novels and who is dreaming of experiencing some love affair. She was invited to visit her aunt and uncle and spend a season in Bath, England. There the young heroine enjoyed visiting balls, theatres and other entertainments. She got acquainted with a young man and made friends with his sister. Her new acquaintances invited her to spend some time (it was about three month!!!!) in their abbey. Catherine had to undergo severe trials throughout the novel. But in the end she was awarded for all the unfairness and troubles.
The book is very easy to read. The author uses many stylistic devices and you will also enjoy reading numerable comic situations and satirical dialogues.

Jennie Gerhardt was a young girl from poor family. She worked as a cleaning-lady in a hotel and met Senator Brander. He seduced her and wanted to marry her, but he died shortly after that without doing it. Jennie was left with his illegitimate baby, Vesta. After some time she got acquainted with Lester Kane. They loved each other though they didn’t marry. His father, being very rich and powerful, didn’t like the fact that his son had a love affair with a poor girl. So he told his son to leave the girl otherwise his father would disinherit him.
If you like the beginning of the book then you should read it till the very end to know what happened next.

A relaxing and enjoyable book!
It is very easy to read because of its plot and its language. The author tells the story of an editor of the newspaper “The Northern Light”. The main hero had to overcome difficulties connected with lack of money and to struggle with the competitor. To keep running the newspaper and to save its existence he did all the work himself as he had no money to pay the employees. And he won this battle and his newspaper continued publishing reports and news. But it’s not everything about this book. You will also find there love, hatred, betrayal and a lot of other forms of interactions between the characters of the book.

I love reading all of Arthur Hailey's books. "Hotel" has many plot lines and characters that seem to intertwine for a great ending. The characters and the plot are very well developed.On one level it's just a very descriptive outline of 5 days in the life of a luxury hotel in New Orleans in the early 1960s. I don't know who wouldn't enjoy this book.
Lili
Комментариев нет: Ссылки на это сообщение

Gabriel Garcia Marquez “Love in the Time of Cholera”

I haven’t got much pleasure while reading this book.

The novel is rather difficult to read as it contains complicated descriptions and few dialogues. It seemed to me a little bit boring though I can’t deny that the book will strike you with its original and unexpected plot.
The novel is about true love and genuine sacrifices in the name of love. The main characters had to wait for FIFTY YEARS to be together!!!! Could you believe it? As for me I think there could happen nothing like that in real life. But nevertheless it is considered to be a masterpiece of classical literature so you should read a book by Garcia Marquez just to have a notion about his manner of writing.

A very good novel indeed! The author creates a richly detailed portrait of Daisy Miller, the main heroine of the novel. The main character does his best to comprehend her complicated inner world, her emotions and the way she acts in particular situations but he fails. He didn’t grasp the main thing about her: Daisy Miller wanted to love and to be loved. In the whole the story is full of drama but I guess you’ll enjoy reading it. 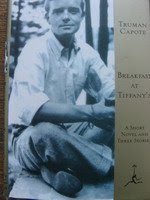 Breakfast at Tiffany’s is one of the most famous and influential Capote’s works. It has GREAT characters (Holly, favorite character of Capote, is a woman who makes a holiday of life) and the story is interesting too. It is a short book that can easily be read in one sitting .
If you've seen the movie but haven't read the book, I strongly suggest you read it!!!!
Lili
1 комментарий: Ссылки на это сообщение 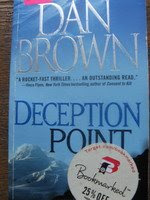 DECEPTION POINT is an exciting techno-thriller.I did enjoy this book.
It was interesting and had a great ending. Another good book by Dan Brown. The plot is political current day, the characters are believable, the setting was extremely vivid and the touch of romance helped the storyline.
A very good read!!!
Lili
Комментариев нет: Ссылки на это сообщение 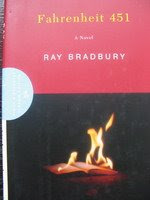 Fahrenheit 451 is on the list of books that should be read by everyone.This is Ray Bradbury's classic story of a future world where books are banned because they lead to thinking and questioning; world where all people do is watch TV; world where "happiness" is supreme, but no one is happy.
The characters were really well written. I really loved this book.

The book is worth reading. It contains few stories and each one has its own characters and plot. Maugham is a brilliant author and his works are carefully thought out. You’ll discover that the ending of the stories has a clever twist which you would never have guesses. Besides the stories carries deep moral sense. The language of the book contains a number of set-expressions which will be of great use to you.